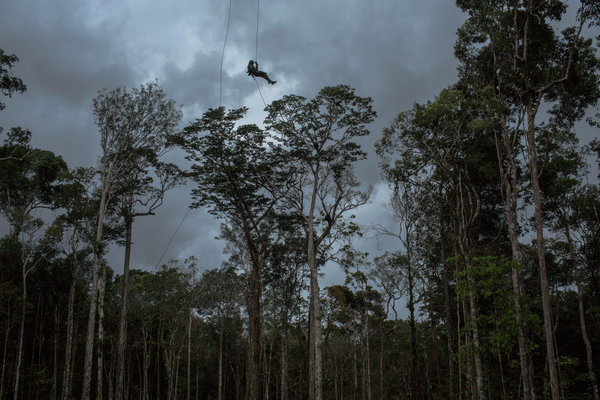 The article was written entirely by the Guardian and the Associated Press.

“Barack Obama and Dilma Rousseff put climate change at the top of their agenda at their bilateral meeting on Tuesday, with the US and Brazil agreeing to obtain up to 20% of their electricity from renewable power by 2030.

Brazil also committed to restoring up to 12m hectares of forest – an area about the size of England or Pennsylvania – in another attempt to reduce the carbon pollution that causes climate change.

The White House said the initiatives were part of a new US-Brazil climate partnership, loosely modelled on the historic US-China agreement reached during Obama’s visit to Beijing last November, intended to build momentum for a global deal to fight climate change in Paris at the end of the year. “Following progress during my trips to China and India, this shows that the world’s major economies can begin to transcend some of the old divides and work together to confront the common challenge that we face,” said Obama at a joint press conference with his Brazilian counterpart.

Rousseff also heralded the agreement as a highlight of her trip, claiming it would help progress towards a global emissions reductions agreement at upcoming talks in Paris.

“Climate change is one of the central challenges of the 21st century,” she said. “And we have one important objective, which is, number one, to ensure that the energy mix in our two countries will have a substantial share of renewable sources of energy.

“As countries that are as vast as continents, we have this very important greenhouse gas emissions target,” added Rousseff. “We attach a great deal of importance to reducing [deforestation].. and we also wish to turn the page and engage in a clear-cut reforestation-oriented policy.”

“This is a big deal,” Brian Deese, the White House climate adviser, told a call with reporters.

He said putting climate change at the centre of the US-Brazil relationship would help drive action on the issue. “We are shining a spotlight on the issues and elevating the conversation around them,” he said.

Rich and poor countries alike have been putting forth their commitments, known as nationally determined contributions, to reduce emissions as part of the treaty, which world leaders hope to finalise later this year in Paris.

Brazil also plans to expand renewable energy sources other than hydropower to between 28% and 33% of its total energy mix by 2030.

And in the electricity sector, the US and Brazil jointly announced intentions to increase their share of renewable, non-hydropower sources to 20% by 2030. Deese said boosting renewables that high in the US would be dependent on controversial power plant emission limits that the Obama administration has proposed.

“We believe that this is an ambitious target, but one that is actually achievable and will create new low-cost opportunities for the American economy,” Deese said. “To achieve it, we’re going to have to continue to hit our marks in implementing the regulations we’ve identified to date.”

The US has already announced its full commitment to the climate treaty: a reduction of greenhouse gas emissions of up to 28% by 2025, compared with 2005 levels. But a key sticking point in the climate treaty has been whether developing countries like Brazil will be willing to make substantial contributions. Poorer nations have balked, arguing that industrialised nations that have polluted more historically bear more of the responsibility for curbing climate change.

The announcement comes on the second day of Rousseff’s visit to Washington, where she met with Obama in the Oval Office on Tuesday morning.

In their visit, Obama and Rousseff have been working to show they have moved beyond tensions sparked by the revelation nearly two years ago that the US was spying on Rousseff. She cancelled a planned state visit in response. Officials in both countries say neither leader is interested in rehashing the spying issues this week and instead want to focus on ways to deepen cooperation.”