On Tuesday, July 7th the State Department of Transportation began ten days of testing of Rio’s revived bonde (tramline) that has been a historic and iconic feature of the hilltop neighbourhood Santa Teresa. Four empty trams are running along 900m of track from Carioca station in Centro to Joaquim Murtinho street in order to test the magnetic brake system. 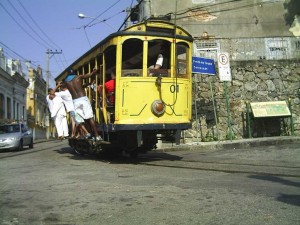 The bonde was a permanent feature of the city and an important form of transport for those getting to and from Santa Teresa until they were suspended following a fatal derailing in 2011. Six people died and over fifty were injured when the brakes failed.

The renewed bonde service was intended to be finished in March 2014, in time for the World Cup. However, work has run behind schedule and the construction consortium are only now delivering the services under penalty and with the threat of their contract being cancelled.

Grouting of cobblestones is due to be completed next week while construction continues on the final section between Joaquim Murtinho and Largo do Curvelo. Tracks have been laid at Largo dos Guimarães but concrete is still going down on Almirante Alexandrino Street, between Bar Arnaldo and the Largo dos Guimaraes.

Santa Teresa relies heavily on tourism and both the suspension of the bonde plus the works to revive it have hit local business hard. There have been extensive complaints of the noise, dust and inconvenience the construction has caused.

On Saturday July 4th local residents took to the streets to protest about the delays and the recent death of a pizza delivery man, Rafael Neris, who was shot on June 29th.

Emídio Dandrea, of Santa Teresa’s residents’ association, AMAS, said to O Globo newspaper July 7th, “Santa Teresa is an historic area and it is deserted… It is a touristic neighborhood and there is no one at the information point. We need the president of the association to say that the work is finishing along with the difficult economic conditions.”

As yet there is no date for the completion of the works.