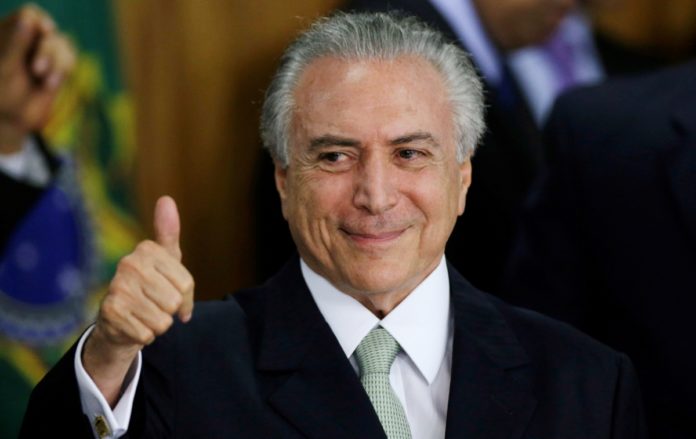 Brazil’s Senate this week resumes impeachment proceedings that are expected to result in the permanent ouster of Dilma Rousseff and strengthen the hand of her vice president, Michel Temer, to revive a shrinking economy.
A special congressional committee is slated to decide Thursday whether to recommend the opening of an impeachment trial against the president based on charges of illegally financing deficit spending. A leading member of the committee on Tuesday presented his findings that Rousseff violated the constitution and should be impeached.
The full Senate will vote next week whether to accept the committee’s recommendation and start the trial, which Senate President Renan Calheiros said could begin by Aug. 25. Temer’s aides — as well as many Rousseff supporters and the majority of Brazilians in a July public-opinion poll — say the chamber has the two-thirds majority needed to defeat the president and hand the reins to Temer. He assumed the presidency on an interim basis in May when the Senate forced Rousseff to step aside during impeachment proceedings.
Financial markets have rallied since Temer took over on proposals to adopt more market-friendly policies and rein in a near-record budget deficit. Yet only the Senate can remove the remaining political uncertainty and give Temer the legitimacy he needs to push for economic reforms, said Zeina Latif, chief economist at brokerage XP Investimentos.
Foreign investors “want to come back to Brazil, but they have to be sure there won’t be any unexpected events that could lead to Rousseff’s return,” she said. “Having just an interim leader complicates things.”
Temer says his plans entail auctioning licenses to improve infrastructure, selling state assets to boost revenue, curbing pension payouts and deregulating a costly labor market. But before Temer can put his full weight behind the measures, he says he needs to be confirmed in office.
“The world needs to know who the president of Brazil is,” he told reporters last week.
Rousseff, who is still living in the presidential palace, has repeatedly said there are no grounds for her ouster and that she is the victim of a bloodless coup. She maintains a small team of aides to handle her defense and frequently takes to social media to critique Temer’s economic policies, saying they will roll back workers’ rights.
Her Workers’ Party rejects media reports that it has given up on Rousseff’s defense in the run up to the final impeachment vote. The party “reaffirms its full commitment in fighting for the return of comrade Dilma to the presidency,” it said in a statement.

Temer’s Challenges
While most Brazilians in public opinion polls favor Rousseff’s ouster, they also have doubts about Temer’s ability to govern.
His administration faces a series of threats that could hamper its efforts to shore up public accounts or even prevent Temer from finishing the four-year presidential term that began when he and Rousseff won re-election in 2014.
Three of Temer’s cabinet members, including the politically powerful Budget Minister Romero Juca, resigned during their first two months in office after leaks of evidence from the sweeping corruption probe known as Car Wash. They denied wrongdoing. Even though Temer himself is not under investigation, the arrest of more politicians could fracture his administration and congressional majority.
One of the most notable victims of Car Wash is congressman Eduardo Cunha, the former speaker of the lower house and a member of Temer’s party. While he professes his innocence, Cunha faces numerous corruption and ethics probes that could land him in jail. Some legislators warn that Cunha could turn state’s evidence and implicate party members and former allies.
Brazil’s electoral court is also reviewing finances from the Rousseff-Temer re-election campaign following allegations of illegal donations. The court could annul their victory, forcing new elections to take place. The two say all campaign contributions were legal.

Shrugged Off
So far, investors have largely shrugged off the threats to Temer’s government. The real has appreciated 22 percent this year and the Ibovespa stock index is up 30 percent. Analysts surveyed by the central bank expect the economy to grow more than 1 percent next year after contracting by more than 3 percent this year and last.
In recent congressional votes, Temer has shored up more than a two-thirds majority necessary to approve constitutional amendments, such as cap on government spending proposed in June. Temer often refers to his good working relationship with Congress as evidence that he is the best choice to pull the country out of political stalemate and get the economy growing again.
“There’s light at the end of the tunnel, but it’s a long tunnel for Brazil,” said Riordan Roett, director of Latin American Studies at Johns Hopkins University’s School of Advanced International Studies. “It’s going to take good management and patience on the part of Brazilians.”